Nota bene: This is a post manually carried forward from an older iteration of my blog. It may not match the tone or topic of my more recent posts.

I don’t know if anyone in the history of written language has ever, on their own volition, gone out to a bookstore and bought themselves a book of Haikus. I know I haven’t. In my case, I received Haiku in English: The first Hundred Years as a Christmas present a few years ago and only then because my parents knew one of the Editors, Mr. Allan Burns. That said, when I decided to pick up this book out of boredom and flip through it, I found myself surprised at the cohesiveness, varied selection, and overall enjoyment factor this book contained.

The Editors in their foreword note that they sought to introduce a novice haiku reader (that’s what, 99.99% of the population?) to the evolution and accomplishments of Haiku over the past 100 years. This means a couple of things: First, that the authors are not listed in alphabetical order, but rather loosely chronologically. The editors also purposefully start with more traditional examples of a haiku, for example, a selection from Richard Wright:

The sudden thunder
Startles the Magnolias
To a deeper white.

But then quickly move to more abstract, loosely haiku-form poems, or even “eye-kus”, visually short poems that seek to achieve the same result as a standard three-line version. I personally found the following from Shawn McMurtagh to be a good example: 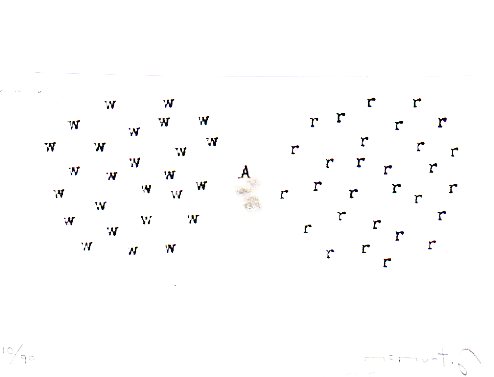 The poems range from serious to silly; deeply distilled to seemingly spur-of-the moment. Jack Kerouac has an almost irreverent contribution:

Missing a kick
at the icebox door
It closed anyway

And Nick Virgilio has a real gut-punch:

The poems can jump from one of these states to the other, giving the reader mental whiplash. Then again, perhaps that’s the point.

The last third or so of the book is devoted to notes and credits, but a short overview of English haikus is also included here. After finishing with a Haiku from Rebecca Lilly (Snow at dawn… / dead singers in their prime / on the radio), the editors chose to include a short haiku primer. It starts by noting that, as with so much of our western borrowed culture, we got the name wrong! Haiku actually comes from the Japanese hokku, which itself is merely a small part of a larger collaborative poem style called renga. With those nitpicks out of the way, a brief coverage of the formation of the English style commences, including why we have the most common 5-7-5 syllable structure.

Immediately after this primer is a brief history of the English haiku. Initially, it began with translations of existing Japanese poems, meaning the West’s first exposure to Haikus was not at the hand of poets, but scholars. Many translators and scholars started by attempting to bring the original structure and flow of the Japanese poems to English, with varying success. Finally, Yone Noguchi wrote the first confirmed original English haiku in 1902:

Tell me the street to Heaven.
This? Or that? Oh, which?
What webs of streets!

The rest of the history is legitimately interesting and varied, and notes the fingerprints of several generations on the decidedly different form of the modern English haiku from its Japanese ancestor. Each new group of authors and poets found the form and left their mark on it. From the first wave, to the “beats” at the end of the ‘30s, and on to the proliferation of Haiku journals and societies that codified certain aspects of the Haiku, the short form takes on a complex set of historical overtones, almost as if the form were a fine wine or a particularly stinky aged cheese.

I admit, I did not think this book would be enjoyable. I picked it up expecting a read-through that would be invigorating as Webster’s New World Dictionary. However, by the end of my journey through this small Anthology, I had a changed opinion. The poems are genuinely interesting, often thought-provoking, and occasionally could move me to emotion. Jim Kacian, Philip Rowland, and Allan Burns have produced a wonderful and elegant foray into a world of poetry I expect most English readers don’t know exist. To sum up:

This was a Review of Haiku In English: The First One Hundred Years, originally written for a writing class. I have not met the editors and I have no commercial stake in this book. I apologize in advance for publishing a review of a Haiku Anthology.